Within six months of installing its first ACOEM Dynoptic opacity monitors, a European engine manufacturing plant has already noticed a number of significant benefits and has decided to roll out a network of Dynoptic monitors across its facility in 2020. 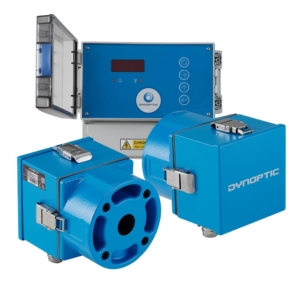 A European manufacturer of industrial diesel and gas engines recently purchased 20 ACOEM Dynoptic DSL-220SWAS monitors for its testing facilities to improve the way it meets environmental regulations when measuring smoke emissions during engine start up and operation.

As a company that exports high horsepower engines and generator globally, it needed to test all its machinery thoroughly to ensure quality and customer satisfaction.

Single pass opacity measurement
The DSL-220 opacity monitor uses a single pass light transmission measurement technique, whereby a transmitter emits a light beam that passes across the stack to a receiver which measures its intensity. Increased particulate or smoke density in the stack gas attenuates the transmitted light and lowers the intensity of the received light. This reduction is measured and presented as a percentage of opacity. The higher the level of particulate or smoke, the more light lost and therefore, the greater the opacity.

The low-cost monitor is simple to install, reliable and easier to access for maintenance compared to other opacity monitors on the market. It has a SWAS configuration – Short path, Wall mount OI, AC power supply and Stainless-steel air purge body.

Realistic reading range and accurate data
“With many production exhaust stacks at our site, it is essential that we can rely on the environmental data we capture.”  he said.

“With the ACOEM Dynoptic meters, the data is very clear – usually a peak of 80% opacity at the beginning of the test that tails off to 1-2% throughout the test sequence. The reading range, and upper and lower limits are realistic and as expected,” he added. 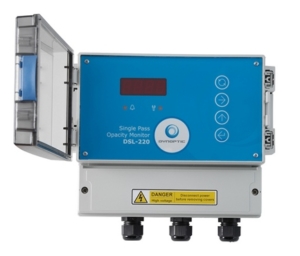 Simplified installation and expert support
Commissioning the DSL-220 into the test cell was a straightforward process, taking less than one day to complete.  ACOEM Dynoptic provided technical support when it came to the meter alignment, including tips to speed up the procedure. The meters align directly with flanges so only the bolt tightness needs to be adjusted to straighten them.

Environmental compliance coupled with time/cost savings
“The main thing for us is environmental impact – which ACOEM Dynoptic monitors really assist us with – their compatibility with other systems, and the cost and time savings are also important factors in our decision to replace all our existing monitors with ACOEM Dynoptic systems over the next 12 months.”

“At a fraction of the price of our previous monitors, and the ease in which we can commission and maintain the monitors, it makes sense to roll out ACOEM Dynoptic across our test facility,” the engineer added. 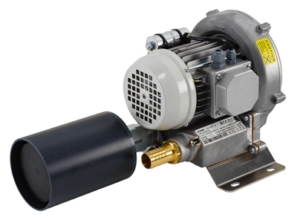 Innovative accessories for improved performance
The ACOEM Dynoptic air blower accessories have also proven to be very useful and another form of savings both financially and environmentally. They are designed to protect the optical surfaces of the instruments from contamination by particle depositions and the damaging effects of heat and/or corrosive stack gas.

At the manufacturer’s testing facility, the blowers purge the air in front of the head with the necessary amount of controlled air.  With their old system, they had to water cool the head and purge the air using compressed air which was an expensive process and involved a lot of air wastage.

Exceptional customer service and ease of maintenance
Although the manufacturer has yet to perform any maintenance on the new system, they credit the monitors’ homogeneous design – where you simply unclip them – as a big plus when it comes to potential servicing.

They have also remarked on the speed of customer service and dealing directly with the manufacturer rather than a distributor. The manufacturer commented that they previously had to wait up to 12 weeks for spare parts with their old supplier, but with ACOEM Dynoptic, parts can be delivered within 2-3 business days. That time saving means considerably less production downtime.

For more information about the Dynoptic DSL-220SWAS monitor and the entire ACOEM Dynoptic range, please telephone +44 (0) 1280 850521, email contact@dynoptic.com  or visit our website